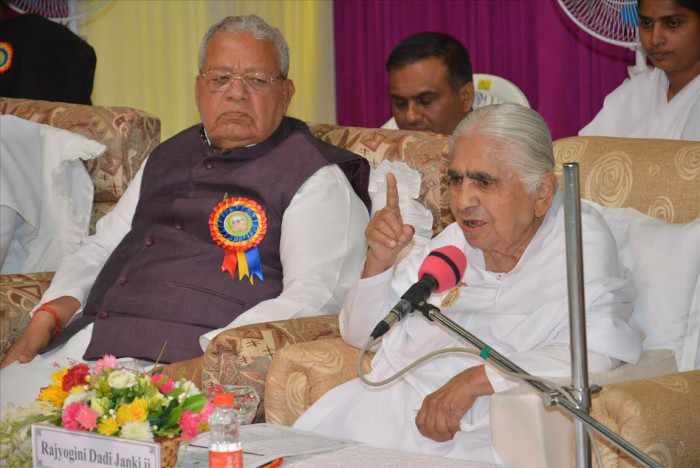 He said that with the powerful spiritual leadership of 101-year-old Dadi Janki, the organisation was capable of showing the right direction to the country and the world.
On the second day of the four-day celebrations, a host of prominent speakers lauded the Brahma Kumaris for setting an example of women’s empowerment and said that its message of peace was much needed in the world today.

More than 6,000 dignitaries from the country and abroad are attending the International Conference-cum-Cultural Festival at the Shantivan campus of the Brahma Kumaris. The event was formally inaugurated yesterday by Prime Minister Narendra Modi through tele-conferencing from the capital.

Lalit Kumar, an outstanding scientist of DRDO, said that though scientific advances had made technology more accessible, people were becoming addicted to gadgets, so moral education was essential in the current times.

He said while science was proven through logic, spirituality could only be felt by personal experience, and congratulated the Brahma Kumaris on running their management smoothly with the help of self-motivated volunteers.

Veteran journalist Rajiv Ranjan Nag said the fourth pillar of democracy was seeing a downfall in values as media groups were now becoming handmaids of business houses. He said Brahma Kumaris was the only organisation of its kind in the world run by women on such a large scale, and added that society needed the mantra of Om Shanti more than ever before because it was under extreme stress.

Mahadev Jankar, Minister for Animal Husbandry, Dairy Development and Fishery Development in Maharashtra, said the knowledge given at the Brahma Kumaris could bring about great transformation, and suggested that the organisation look into the field of animal welfare.

Dr. M H Ghazali, Editor, United News Network, said that India was the only country that could become a world guru because it had always given the message of peace. He urged the BKs to take the initiative to make value education a part of school curricula and also conduct an awareness campaign in rural areas about the role of right nutrition in good health.

Prof. Radhamadhab Dash, Vice-Chancellor of Jagannath Sanskrit Vishvavidyalaya in Puri, Odisha, said the mantra of Om Shanti was meant to bring back peace into the world.

Earlier in the day, H.H. Swami Chidanand Swami Saraswati, president of Parmarath Niketan Ashram, said the Brahma Kumaris had shown how the world could be one family. “Chaos does not happen outside; it happens inside of us,” he said, asking everyone to participate in building a culture of trust.

BK Karuna, head of multimedia at the Brahma Kumaris, apprised everyone of the latest media collaborations of the organisation. He said Tata Sky had launched a channel to show the daily activities of Brahma Kumaris centres.

BK Marcelo Bulk, Director of the Brahma Kumaris centres in Colombia, said that in the fast-paced urban culture, where the only certainty was uncertainty, the loss of one’s real, spiritual identity was a big crisis. This is where India, with its rich tradition and spiritual heritage, was making a difference by bringing peace and meaning to life. Referring to the decades of war in Colombia, he said: “Peace is not something that you can get by signing a treaty, but through deep reflection.”

G.V.S.R. Anjaneyulu, MLA and chairman of Shivshakthi Group, Hyderabad, said that practising Rajyoga meditation as taught at the Brahma Kumaris had given him a great deal of internal satisfaction. He said knowledge of peace and happiness could not be received from top universities, but from spiritual organisations like the BK.

Asserting that spirituality had answers to current challenges, Dr. G. Vivekanand, Advisor, Telangana Government, proposed that the Brahma Kumaris work to spread their knowledge in the rural areas of his state.